The late Harvard philosopher John Rawls stands to this day as a titan of left-of-center political thought. Like other great thinkers, his perspective changed over time, and almost certainly was misused by more than a few. In the interest of full disclosure, your current author finds Rawls fascinating but ultimately less than fully persuasive depending on which version of Rawlsianism we’re talking about.

Many trees died to carry out debates over Rawls and his ideas, but with those caveats aside, I’ll do my best to sum up Rawls’ philosophy in two sentences (at least the version I find most persuasive.) First, policy should be made as if the world were to start again with you having no knowledge of who you would be in the next life. Second, if you accept this premise, then it follows that you should support policies that create a path out of poverty for those starting with the least.

In years past I entertained myself with a Rawlsian thought experiment based upon NAEP data: The world was starting over. You had no idea what condition you might find yourself. You could be the child of a crack-cocaine addict, a doting and virtuous billionaire, or anything in between.

So the mysterious POWERS THAT BE inform you that you have one day to live, but they are going to let you pick an American state in which to be reincarnated in the next life. So…

Since you have no idea what your family life might be like, you might want to focus on how different jurisdictions do at getting disadvantaged children to read in the early grades. It’s hard to have much success in later grades or even to graduate from high school without being able to read, and it is difficult to learn to read past a certain age. You can’t count on family aid, so which public school system should you take your chances with?

The new 2013 NAEP is handy in this regard. Here is what it shows for children eligible for a free- or reduced-price lunch under federal guidelines:

Congratulations Florida – not only are you ranked at the top, it looks like you are the only state in the top 20+ states with a majority minority K-12 population. Go ahead and give yourself a moment to celebrate. 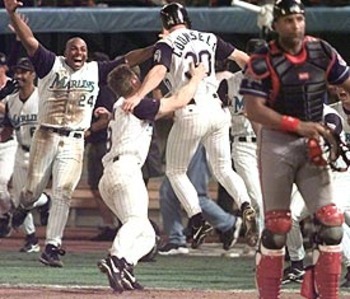 Did that feel good? Did you enjoy that?

Now wave off the pink clouds of euphoria. Back here in the real world, you’ve got 27 percent down and 73 percent to go. Everything that has been done to this point remains completely and totally inadequate against the enormous needs of Florida’s future. If you think otherwise, simply study the chart: if a little better than a one-in-four shot is not good enough for you as a theoretical Florida child, you cannot think of this as good enough for all too real children in practice.

Matthew Ladner is executive editor of redefinED. He has written numerous studies on school choice, charter schools and special education reform, and his articles have appeared in Education Next; the Catholic Education: A Journal of Inquiry and Practice; and the British Journal of Political Science. He is a graduate of the University of Texas at Austin and received a master's degree and a Ph.D. in political science from the University of Houston. He lives in Phoenix with his wife and three children.

The empire strikes out

‘Social justice issue of our era’ front and...

Do Boston charter schools have a lesson to...

Then why does Florida treat its teachers so poorly?
Florida’s teachers are among the worst paid in the nation
There are zero work protections for teachers hired after 2010
There are Odious teacher evaluation measures
Pay based on standardized test scores, coming soon
Often vilified by leaders such as Gary Chartrand and Jeb Bush

It’s NEAP time friends and in case you don’t know that’s the standardized test given every couple years that the powers-that-be use to compare the states and other countries. Since it began in the early ninnies, Florida has seen small but steady growth.

Right leaning pundits say this shows that Jeb Bush’s A-F grading scale and school choice options are working. They never mention the class size amendment nor can they prove those reforms didn’t actually slow down Florida’s progress but they beat the NEAP drum never-the-less. But lets put the last part of that aside for a moment.

If people like Jeb Bush and the REdefined Ed blog are continuously pointing to Florida and saying what we are doing is working then why does Florida treat its teachers so poorly? That is a question we should all be asking.

That would be a different question entirely and one worth exploring. I do not think it should be the first question you think of, however, since THE purpose of K-12 is educating students.

Now, if you were to point to these results and say: “Hey, look at the work us teachers are doing here in Florida! Look at how well we teach low-income kids of all races, we are beating the odds!” Then you would have a reason to argue for greater (and much deserved) rewards for your hard work.

hmm, who do you think does the educating? we can’t exactly ignore teachers in the education equation. In the problem 3 + 5, which number is more important?

I anxiously await your column about why Florida treats its teachers so poorly. Later this week I presume.

I too am sorry that you feel teachers are treated poorly in Florida. That said, there seem to be some strong correlation between your poorly treated teachers and improved outcomes for kids.

Which side of that equation is more important?

I’m sorry you feel that teachers are treated poorly, but it is worth noting that if I ran this same NAEP data for 1998 that Florida would rank near the bottom rather than at the top. As for the other possible explanations for Florida’s gains, my coauthor and I addressed them in the following article a few years ago:

Even your own piece says Florida’s improvement started before Bush, how do you know he didn’t slow down or hamper improvement?

Florida essentially had no reading improvement between 1992 and 1998. You can examine NAEP scores since 1998 at the following link:

If all of these silly reforms are working so well then Florida’s teachers should not rank in the bottom half as it relates to pay. All Florida teachers should make much more than they do! Of course, Jeb and his minions at this blog do not really care about teachers. The problem is you cannot put “students first” by putting teachers last. The thing is these “reforms” are not meant to change the system. They are all designed to privatize public education and ultimately kill it. Corporate charters, vouchers, online education are, for the most part, a scam. Venture capitalists are doing all they can to get their grubby hands on the public’s money.

Silly reforms? In 2003 Florida was 28th in 4th grade reading for low-income kids; ten years later Florida is 1st. I don’t think you’d even get Horace Mann to agree that cushy jobs for educators is an objective of a public education system.

Name-calling diminishes your argument and doesn’t change the reality of the effectiveness of the Florida education revolution.

Your attitude about public schools reminds me of the many militarists that I met during my 20 years as fighter pilot. They are people who are always defending the INSTITUTION of the US military. They believed that the public should rally to defend the military. I think it should still be the other way around.

Yes. Silly. I am a parent of 2 elementary children who are growing tired of the constant FCAT talk. This year recess was cut to 9 minutes! NINE!!! That is not enough time for kids to be kids. The reason? Test scores! This testing madness has to stop! Would I tell you how to fly a plane? No, so I suggest you stop telling me what is good for children. I bet you would not last in the classroom. Most of the Jeb sycophants on this blog never taught which is laughable. You keep talking about 15 years ago. Big deal. All that means is that we have a generation of kids who grew up on Jebbie’s silly reforms. You would think that our kids would be geniuses by now as long as we have adopted the test-and-punish madness. I suggest if you want support of teachers you actually fight for good salaries all of our teachers! I know that is hard for you people on his blog seeing as how Jeb hates public education. I know you get your marching orders from him, Levesque and others but honestly, if our schools are doing so well then teachers ought to be paid accordingly. That, after all is part of the “free enterprise” system you are trying to push on public education. The fact that Jeb and his minions do not acknowledge that teachers deserve better pay lends credence to the belief that “reform” is about putting money into the hands of billionaires through privatization not helping children. Yes, teachers are demoralized by a silly merit pay system that holds teachers accountable for students they do not teach. We will go to the polls in record numbers next year and sweep out Rick Scott over this. Would you be held accountable for blogs you do not write? NO! So, yes, this IS silly. In fact, it is MORONIC! Teacher pay is being impacted by things we do not control such as poverty. Finland has great schools with little testing, unionized teachers but low child poverty. Perhaps we ought to focus on the Finnish model of education because it actually works! Do some research and then you can talk!

My apologies if you do not write for this blog. It does not change the reality that many of Jeb’s ideas may look good on paper but they are stupid when carried out in practice.

I think it’s sad that the highest ranked state is only at 27%. We already spend more than nearly everyone else on education, so how do we improve education in this country? Obviously, throwing money at the problem is not the solution.